Nicola from Bournemouth had a stroke in her thirties

"I had a stroke in my thirties, on October 5th 2017. It happened when I was at home on my own, I just passed out. I didn't even think a stroke was on the cards for me! I ended up in hospital for five days, and they were initially baffled as to what it was. Then they discovered I had a hole in my heart which was the cause of the stroke.

Life before the stoke was full-on, and a bit of a roller coaster, burning the candle at both ends! I've always had an active, outgoing and larger-than-life lifestyle! I'd been going through a bit of a stressful time in my life. I would get stressed and worried, and over-think things. Looking back, I think 'why on earth did I worry so much?!'

Previously, I’d put my own wellbeing to the side. The stroke has caused me to re-think that: I lost some movement on the left side of my body so had to learn to walk again. Every single day, I wouldn't let the hardships of getting moving stop me - I was determined to get up and out of bed every day. 'I'm not going to let this stop me' I would think to myself.

All the support I've received has been fantastic

I'm so grateful for the NHS! It's not even just the physical side that's been challenging, while I have fatigue now, I've re-adjusted my life around it. But the mental recovery took time. All the staff who've supported me have been wonderful.

I'm a teacher, so I was upset that my passion and career was at risk. But I was determined to get back to it, and that helped. Within five days I was Skyping my home tutor pupils which was great to get back to normal, thinking about something else."

I play tennis once a week in Bournemouth. I still get fatigued, so I need to be careful, but it's a great stress release. I go to the gym regularly, which took time to get back into. I enrolled with Active 4 Health at my local gym for an exercise referral which was a good way to get started. The gym staff checked my weight, height and created a programme for me, mostly about building strength, lots of gentle weight and leg exercises. I avoid the running machine as my balance isn't what it once was, I love the rowing machine and the bike in short stints.

I take care of my health and wellbeing now

I eat well, I have my blood pressure checked regularly. I do have my blips, and my family has been so important in supporting me through. I'm not scared of telling people about my stroke. Strokes aren't fully understood in younger people, and it has been particularly traumatic. I pace myself and need to recognise when my body is tired.

I'll often excuse myself early from social events when I start to feel tired and my friends totally understand. I do get muddled and mix my words at times, but my friends are there for me and don't even flinch. My family and friends are proud of me.

Don't take your wellbeing for granted

Stress has such a big impact on your health. I've been learning techniques to keep my heart and head healthy. Work, relationships, life - they can all be stressful. It's so important to talk to people if you're feeling a bit rubbish. I have a 'worry book' in which I write down all my worries, and then share them with a trusted friend. I put my worries to bed with my worry book which gives me perspective and calm.

Taking part in activities that take me out of the worries of life is important too. My tennis does that for me, baking too! I can just switch off and forget about everything else. I still get stressed, it's hard to avoid it! But I've learnt to take a deep breath and put the worry in its place. I eat so well now, I enjoy my work and the tennis and baking - it's great! It's all part of my recovery and maintaining my health in the future. 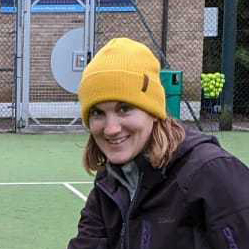